In the hotel business, it’s all about creating a great impression with your guests. From the moment they walk through your doors, they should be immediately impressed with how clean, beautiful and put-together your building is. This impression should only grow stronger as they enter their room. But how do you achieve this? How do you make your guests feel they’ve just walked into a place where they’ll be safe, comfortable and cared for?

How to Fold Towel Animals:

Creating this atmosphere isn’t a matter of changing one specific thing. Rather, it’s a combination of lots of little things that all work together to wow your guests. It’s little things like the way the bedclothes are neatly made, the carpets are vacuumed, the bathrooms are spotless, and everything is in its place. One of these details that you might not initially think of, but that can have a significant impact when done right, is your towels.

The way your towels are folded can go a long way toward creating an instant feeling of sophistication and class, or neglect and disrepair. To help you hit just the right note with your guests from the minute they walk through your doors, we want to talk to you today about how to fold your towels.

The Benefits of Folding Your Towels Correctly

In addition to simply creating a great first impression on your guests, proper towel folding brings with it a whole host of additional benefits and perks. Just a few of the positive implications of this simple task include:

Of course, not every towel can be folded in the same way. What works for one towel won’t always work for a different towel. To fully master the art of folding all towels in all situations, you’ll want to learn which factors affect the way towels can be folded. A quick guide is as follows:

Where Should You Fold Towels?

Folding towels doesn’t have to be a difficult task, but it can easily become more complicated if you aren’t working in the correct environment. To ensure the best and smoothest folds, we recommend carefully evaluating the towel at hand and choosing the best place to fold it.

Put simply, you have two choices when it comes to folding locations. You can either do it entirely in the air or laid out on a flat surface such as a bed, table or countertop. Both options are good choices, and often, it simply comes down to a matter of personal preference and situation.

For example, if you’re practicing a more complicated fold, it may be wise to incorporate a table to help you get the edges just right and the wrinkles smoothed out. However, if you’re only doing a very simple fold, it might be easiest and even fastest to just do it with your hands in the air.

To decide which is best for you, practice both ways on multiple towels with multiple different folds, and see which you like best.

Time to get to the nitty-gritty details. If you’re looking for the best towel folding ideas, then you’re in the right place. We’ll go over some simpler folds, some more specialty folds and even some extra special tricks, like towel animals and decorative towel folding.

Because of their small size, there isn’t a whole lot you can do with a washcloth beyond folding it into a basic square. To do this, complete the following steps.

2. How to Fold a Hand Towel

Hand towels are also fairly simple to fold, as they’re only slightly larger than a washcloth. Because of their rectangular shape, however, you’ll want to pay attention to which side is which.

3. How to Fold a Bath Towel for Shelf or Closet Storage

If your bath towel is going to be sitting on a shelf until you plan on picking it up and draping it over a towel bar, then this is the fold for you. Keep in mind that if your towel is extra long, you may need to add in an extra fold along the way to make this work.

If you’re searching for a decorative rolled look for storage or display, such as the look you might see at a spa, this is how to do it.

5. How to Do a Fancy Pocket Fold for a Hanging Towel

Prepping the hotel room for incoming guests and looking for a way to make the hanging towels look just a little extra special? Try this fancy pocket fold and see if it doesn’t do the trick.

Next, you’ll want to fold the washcloth so that it pokes out of the towel pocket just so. Here’s how to do it.

Learning how to fold a towel animal gets you in an origami frame of mind. You can take any plain towel and create a fun and whimsical animal which can rest in a bathroom or on a bed. Guests are sure to notice and appreciate something as unique as animals. It’s a great way to add a special touch to any room and is an especially big hit with kids. Follow these step by step towel origami for a number of animals.

1. How to Fold Romantic Towel Swans

These romantic-looking towel swans can be just the thing to brighten up a honeymoon suite, or even an ordinary hotel room if the occasion is right. It might look complicated, but with a little determination, you’ll soon get the hang of it. Follow these steps to fold this shape yourself.

2. How to Fold Towel Snails

This fun bit of towel origami is always impressive, whether your guests are adults, children or both. Follow these instructions to create your snail.

3. How to Fold Towel Snakes 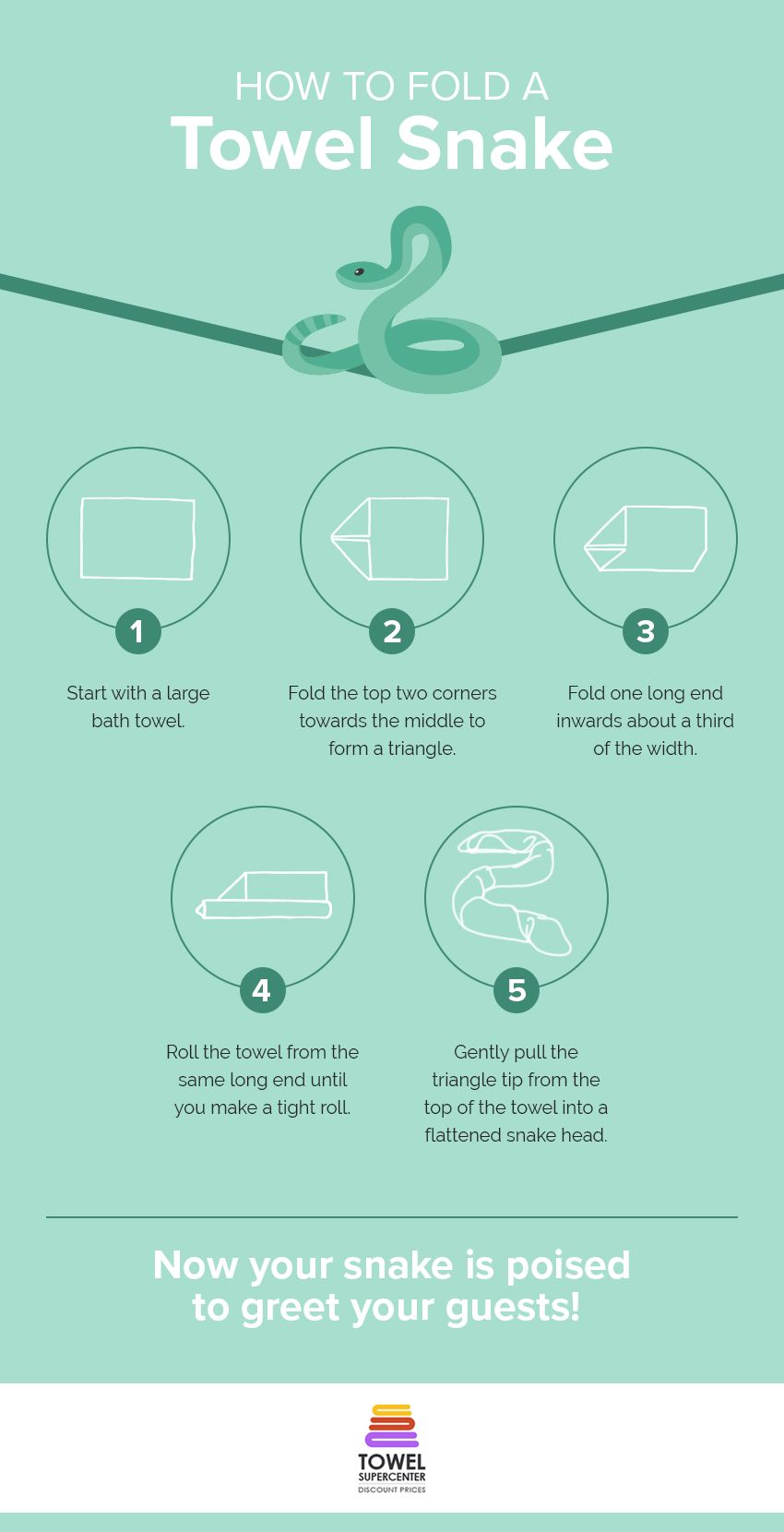 When learning how to make towel animals, a towel snake is a great option because it is quite simple. Start with a large bath towel and then:

4. How to Fold Towel Elephants

This will take a little more effort and time, but the effect is well worth it. You will need a hand towel, bath towel and googly eyes. A ribbon can also add a nice effect. While you can do this with white towels, grey towels can look especially effective. Once you have your materials, you will want to:

5. How to Fold Towel Crabs

For a hotel by the sea, especially, a fun towel crab can look wonderful lurking in the bathroom or on a bed. You can make this fun crab with any color hand or bath towel, but bright red will look best. You may also want to have novelty eyes on hand to give your towel animal a little more personality. Here’s how you can assemble:

Of course, you can’t fold your hotel towels like a pro if you haven’t bought them yet. If you’re shopping for the perfect place to buy some high-quality hotel towels in every size and style you could ever want, then we think you’ll love what we have to offer at Towel Super Center. Browse our full selection today and stock your hotel with nothing but the best.