At the heels of a drawn-out civil war that effectively erased Sri Lanka from the trodden tourist trail, the small tear-shaped country has emerged as a rewarding travel destination. Despite its tiny size, the island country is replete with things to see—from ancient cities to verdant tea plantations and from gold-sand beaches to wildlife-rich parks.

For travelers looking to delve into the country’s history, the Cultural Triangle is an absolute must-see area. The triangle’s three points mark the island’s three historic capitals: the hill country’s capital of Kandy, the medieval city of Polonnaruwa and the ancient Sinhalese center of Anuradhapura.

I visited Sri Lanka with a friend, following a brief visit to Singapore. first stop on our two week Sri Lanka itinerary was the Cultural Triangle—an area in country’s central highlands that is bursting at the seams with historic attractions and must-see World Heritage Sites. 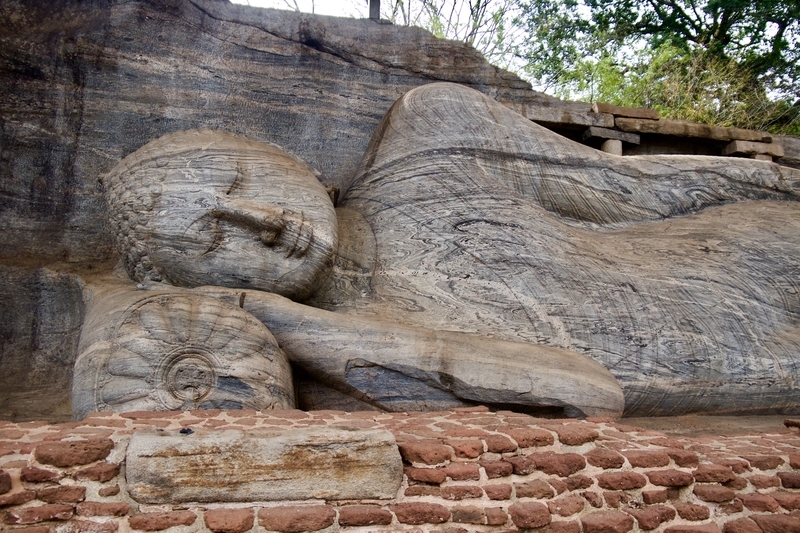 The Cultural Triangle in Sri Lanka is the crucible of early Sinhalese civilization. An essential part of any Sri Lanka itinerary, the triangle boasts some of the greatest archeological and historical sites in South Asia.

Situated about two hours east of the Colombo Airport, Kandy is Sri Lanka’s second largest city and the undeniable center of its artistic and cultural heritage. While we primarily used Kandy as a transportation hub for the island, we got a chance to spend a bit of time walking the shores of Lake Kandy and visiting the Temple of the Sacred Tooth-a relic that purportedly houses one of the Buddha’s teeth encased in a golden casket.

The temple is a pilgrimage site for Buddhists from around the island and is an important part of Kandy’s cultural landscape. 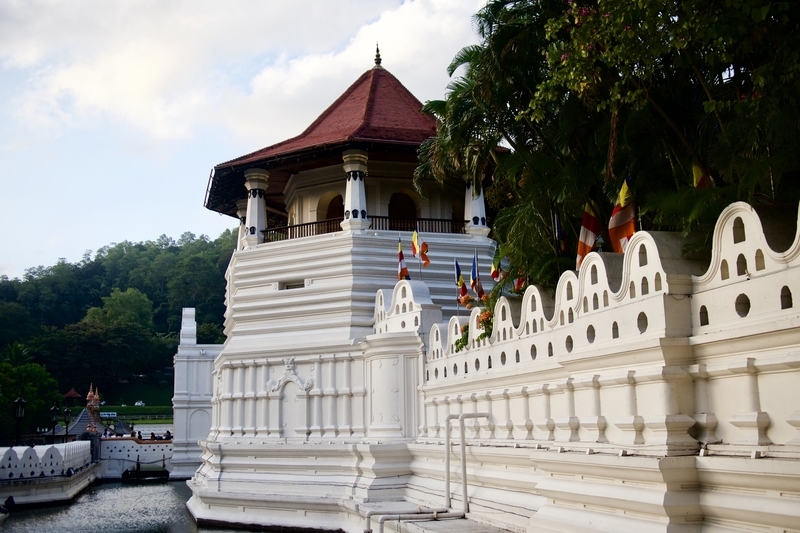 Read more: Where to watch india vs sri lanka live in usa

North of Kandy, the lush hills of the highlands give way to the scrubby plains of the dry zone. This hot and dusty region is blanketed in thorny brush and punctuated by isolated rock monoliths that tower dramatically over the surrounding flatlands.

The dusty little town of Dambulla sits at the heart of Sri Lanka’s Cultural Triangle. This uninspiring jumble of buildings at the junction of some of the country’s most heavily-trafficked highways, is the perfect base for exploring the highlights of the island’s central region.

The first major historical site that Emma and I visited in Sri Lanka’s Cultural Triangle, was the Dambulla Cave Temple. Known for its frescoes that date back to to the first century BC, the complex of caverns is the largest and best preserved of its kind on the island.

The temple contains five dimly-lit grottoes with original frescoes and statues of the Buddha. Our Lonely Planet guide suggested visiting the caves in reverse order; starting at the fifth cave and ending at the first. For while the fifth cave is relatively nondescript, the first two offer some of the island’s most exquisite examples of Sinhalese Buddhist art. 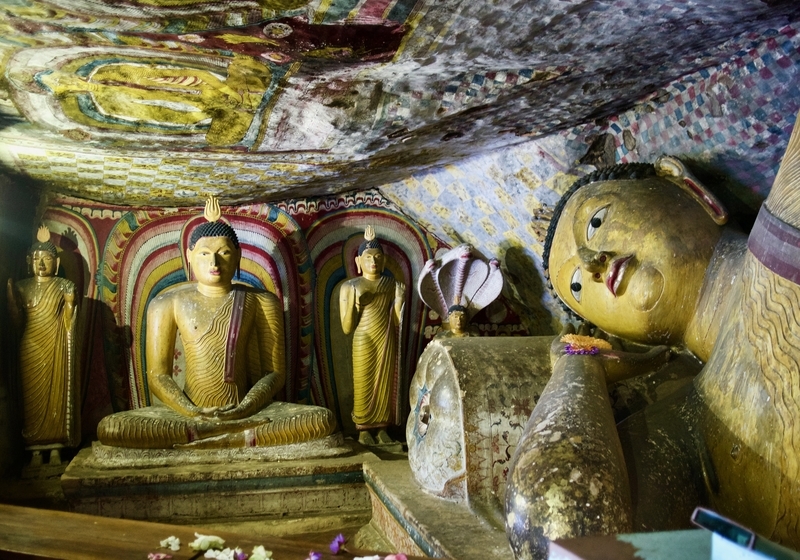 The Dambulla Cave Temple sits atop an outcrop of rock at the southern end of town. It is well worth the bloated $10 entrance fee for foreigners, and often paired with an afternoon visit to one of the region’s other attractions.

On our second day in Central Sri Lanka, we decided to pack in a visit to two of the country’s premier sites-the spectacular citadel of Sigiriya and the ancient capital of Polonnaruwa.

Sigiriya (also known as Lion’s Rock) rises from the arid scrubland. It is an extraordinary site, made all the more unforgettable by its dramatic setting. In 1982, UNESCO declared Sigiriya a World Heritage Site.

Today, it is the country’s most recognizable icon and one of the top places to visit in Sri Lanka. 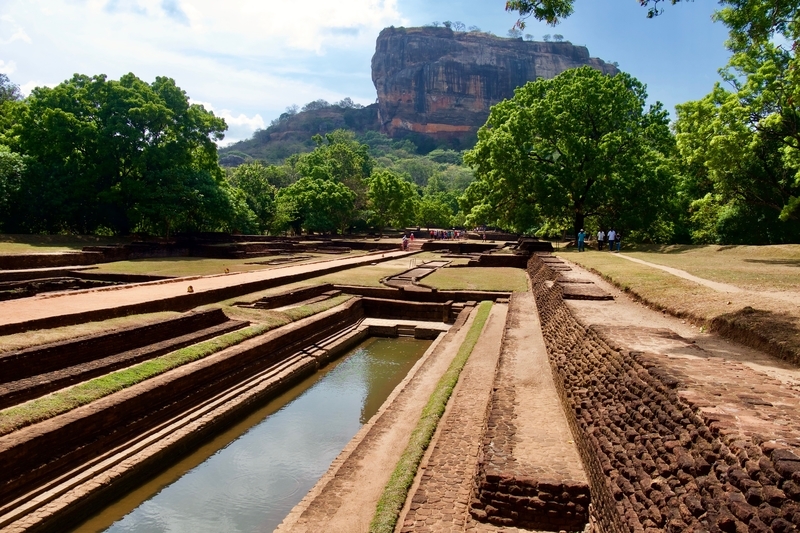 Due to its popularity and despite its steep $30 entrance fee, Sigiriya can get crowded-especially in the late morning and early afternoon. Fellow travelers we met at our hostel suggested we skip Sigiriya altogether and climb to the top of Pidurangala Rock instead.

But I’m glad we stayed on the tourist trail and climbed the towering Lion’s Rock. For had we skipped a visit to Sigiriya in order to save $30, I can guarantee we would have regretted our decision.

After spending the morning in Sigiriya, Emma and I decided to round out our busy day with a visit to Polonnaruwa. Those hoping to visit both archeological sites within a day, can catch a bus from Sigiriya to the Inamaluwa juncion, followed by another bus from the junction to Polonnaruwa. 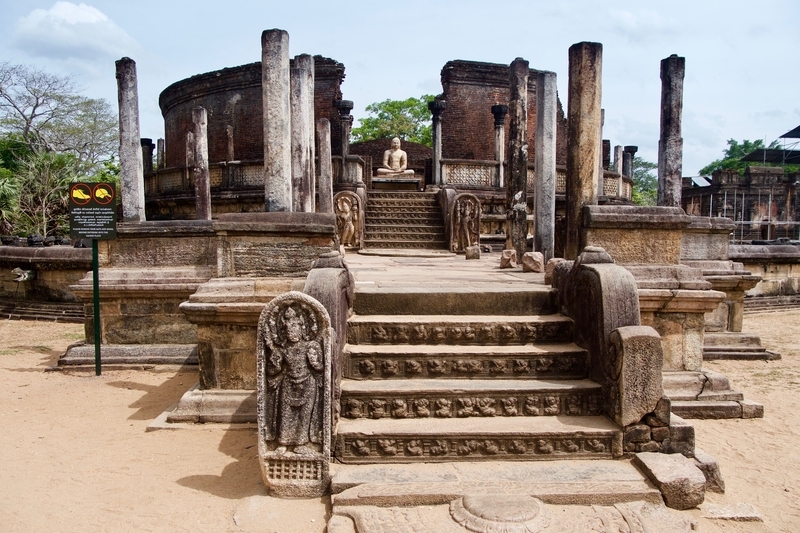 Like Ayutthaya in Thailand and Bagan in Myanmar, Polonnaruwa is so vast that touring the area on foot is both exhausting and time-consuming. As a result, many people choose to explore Polonnaruwa by bicycle. And we, too, had anticipated discovering the ruins on two wheels. But the unrelenting heat and comparable cost to taking a tuk-tuk, prompted us to hire a guide and driver for the day instead.

Hiring a driver turned out to be one of the best decisions we made during our visit to the Cultural Triangle. Our guide-a lanky old man with an affable smile-brought us to the ancient city’s highlights, while proudly showing off his knowledge of the area in broken English. 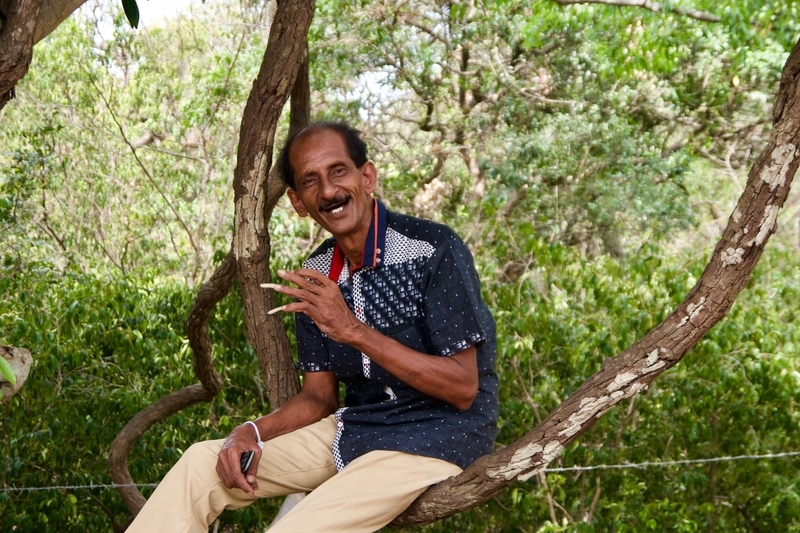 Together, we visited reclining Buddhas, temples adorned in frescoes and imposing pagodas. Then, after taking in Polonnaruwa’s most notable ruins, our guide brought us past rice paddies and local villages-giving us a glimpse of rural Sri Lankan life and ensuring that we received much more than we bargained for by choosing to hire him for the day.

On our third day in Central Sri Lanka, we decided to take a bus to the temple complex of Anuradhapura. Anuradhapura is the spiritual heart of the Cultural Triangle and the country’s ancient Sinhalese capital. It was the capital of the island from the third century BC, until its destruction in 993 AD. Up until its demise, Anuradhapura was one of Asia’s greatest metropolises. 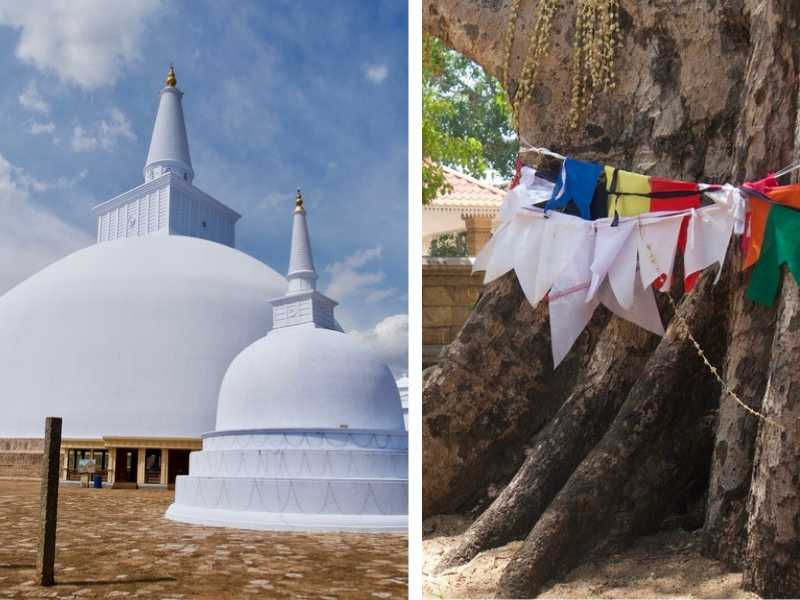 Anuradhapura was established around an offspring of the Bodhi Tree-the tree under which Siddhartha Gautama attained enlightenment and became Buddha. Brought to the area in 288 BC by Emperor Ashoka’s daughter, Sanghamitta, the offspring (known as the Jaya Sri Maha Bodhi Tree) is the world’s oldest living human-planted tree. 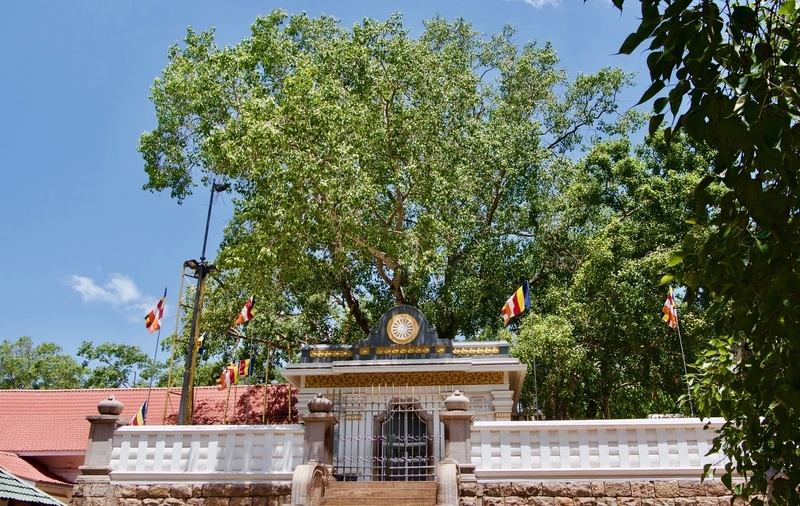 The ruins of Anuradhapura are scattered amidst the buildings of the present-day city and cover an area of 36 square kilometers. The distances are too far and the heat too unbearable, to explore the area on foot.

So, as with our visit to Polonnaruwa, Emma and I hired a tuk-tuk driver to take us to the Anuradhapura’s Bodhi Tree, its Buddhist statues, its holy palaces and its towering dagobas.

Then, after almost crippling from heat-induced exhaustion, we made our way back to Dambulla by bus, grabbed our backpacks from the Dambulla City Hostel and continued back along the Cultural Triangle’s hypotenuse, toward Kandy.