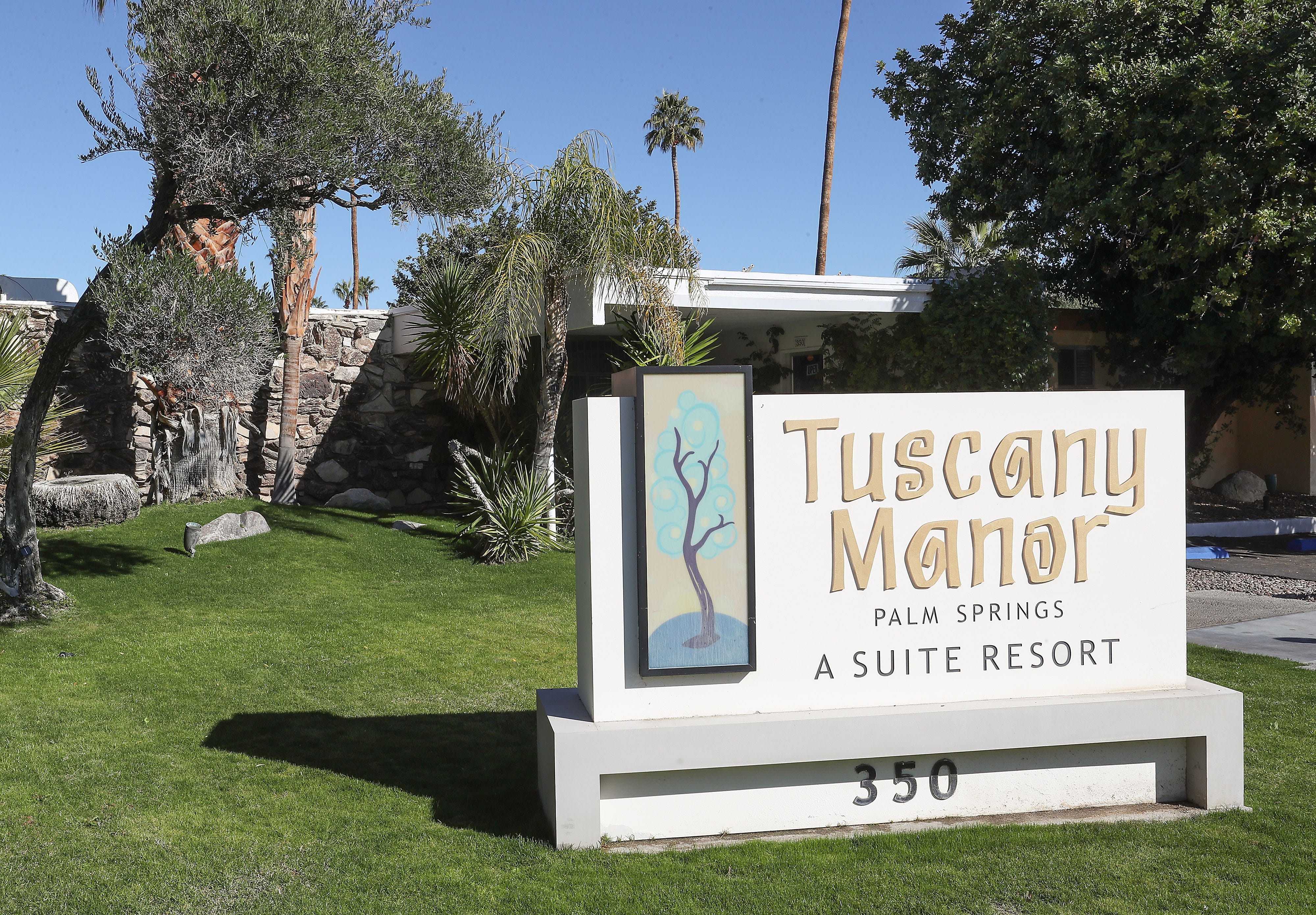 The decision to create Palm Springs’ newest clothing-optional boutique hotel was driven in part by the serendipity of a furniture sale.

Tuscany Manor opened as a hotel in March 2019. Previously, it was a sober living facility and had been vacant for several years. But other than the mid-century design of the property, owner Steve Bein and the rest of the operating team were wondering how to set it apart from the hundreds of other valley hotels.

Then Bein heard about a furniture sale at a clothing-optional hotel that was shutting down. In addition to snagging a few patio pieces, he started to hatch a new idea.

“Someone said, ‘Oh, there’s another hotel which is closing, and they’re liquidating some of their furniture,’” Bein said. “And it turned out that was Terra Cotta, and Terra Cotta was one of the top 10 clothing-optional hotels.”

(The Terra Cotta, which had first operated on East Racquet Club Road and relocated to a corner lot on South Warm Sands Drive in 2017, closed in August 2019. The property is now the home of Les Cactus, which opened this month.)

So far, Tuscany Manor has had a successful winter hosting many former guests of the Terra Cotta, which is using its website to refer its clientele to Tuscany Manor. They’ve also hosted unique buyouts like a motorcycle club.

In the naturist community, Palm Springs already has a reputation: Visit Palm Springs lists the city has having 18 clothing-optional resorts, including several exclusively for gay men.

Bein, who is a retired dentist and longtime artist originally from Los Angeles, is the supervising member of the LLC that owns the property, The team of hosts saw the clothing-optional distinction as a way to set Tuscany Manor apart from other properties. And they knew that the former Terra Cotta guests would be looking for a new, serene spot to vacation.

Beyond that, Bein, who hasn’t operated a hotel before and has enlisted local experts to help run day-to-day operations, believes the property will be able to stay afloat by offering good service.

“We’re not a five-star hotel, but we want to treat our people as if it’s a six-star hotel,” he said.

By September, Tuscany Manor had re-branded itself as 24-suite clothing-optional resort centered around a spacious courtyard decked out with a heated pool, hot tub and firepits. The property, on West Chino Canyon Road in the Little Tuscany neighborhood, is open to couples and singles over the age of 21.

Transforming the site from a sober living facility to a hotel meant a slew of repairs and repainting, as some parts of the property had been damaged, Bein said. They also removed a large fence that once surrounded the pool to make the courtyard more open, and added solar lights to the remaining fence posts for evening mood lighting.

Once the hotel became clothing-optional, they also added some privacy screening to the northern side of the property to shield the view from neighboring homes.

Aside from being clothing-optional, operations at Tuscany Manor are just like any other independently owned property, where hosts strive to make their guests feel at home. All rooms include full kitchens plus a complimentary breakfast. Hotel staff will arrange for food delivery from local restaurants for other meals.

The one- and two-bedroom apartment-style units feature cozy furniture and large format prints of Bein’s own nature photography taken during his global travels. A massage therapist is available for in-room services, and a 4 p.m. sunset social hour serves up snacks by the pool while the sun ducks behind the mountains.

Day passes are also available, and the property has hosted events like a New Year’s Eve dinner and a bodypainting party.

With mountain views in a quiet neighborhood, Tuscany Manor is full of the peaceful, calm energy that draws many travelers to the desert. But general manager Don Clark, who has worked in hospitality for almost three decades, said the clothing-optional status creates a close community among guests — who are a wide variety of naturists but often couples aged 40 and older.

“This is the first hotel I’ve ever run or operated where 10 people could check in here and not know each other, and by the end of the day, they’re talking, they’re barbecuing together, exchanging numbers and emails,” Clark said. “It’s amazing. The social cohesion here is just so different, because it’s clothing optional.”

For his part, Clark often sports a collection of psychedelic-print shorts to wear when he’s working around the resort and attending to guests.

Visiting clothing-optional (or clothing-free) resorts is “a lifestyle,” Clark said. Many naturists will visit different properties in various regions throughout the year based on the weather. Clark said the clothing-optional business in the desert tends to pick up more in the latter part of the winter, when there’s no need for sweaters at night.

Clark also said the crowd is extremely accepting and non-judgmental. The American Association for Nude Recreation promotes nudism as a form of body acceptance, and as a method of relaxation where “without clothes, stress seems to melt away.”

“When people don’t have their clothes, everyone’s equal,” he said.

Melissa Daniels covers business and real estate in the Coachella Valley. She can be reached at (760)-567-8458 or [email protected] Follow Melissa on Twitter @melissamdaniels